OCEANSIDE, CA…Democrat Elizabeth Warren, candidate for California State Assembly in the 76th district, won’t have to face an incumbent in June’s top two primary—and that’s a positive GAME-CHANGER for the community activist-turned-candidate who leads the pack of candidates vying for the seat.

Rep. Darrell Issa’s decision to not seek re-election in the 49th Congressional District--which overlays Assembly District 76--set off a chain reaction in the GOP, and Warren’s closest competition, incumbent Assemblyman Rocky Chavez, announced his intent to run for Issa’s seat in Congress.

Republicans are lining up to run in AD 76, but with no incumbent in the Assembly race, California’s own Elizabeth Warren leads the way, increasing the odds that Oceanside, Carlsbad, Vista, Encinitas and Camp Pendleton will be represented by a progressive Democrat. 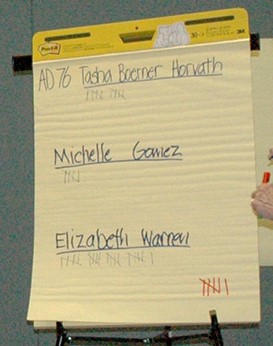 Like her Senatorial namesake, California’s Elizabeth Warren is a national progressive figure, most recently serving as Director of Communications for the D.C.-based nonprofit, People Demanding Action. As an organizing leader for  MoveOn.org, (supporting MoveOn councils in multiple states and Washington, D.C.) the progressive firebrand led a nationwide grassroots campaign to stop the Trans-Pacific Partnership (TPP) trade agreement; rallied in Washington D.C. with Communications Workers of America; and was a Standing Committee member at the 2016 Democratic National Convention. Closer to home, Elizabeth is a two-time CADEM Convention Delegate, and was a featured speaker on the TPP at Southern California rallies leading up to the presidential primary.

A self-described policy wonk, Elizabeth has pored over legislation and written about everything from economic and social justice to global trade, working to bring national and international events into local focus. People Demanding Action, the nonprofit where she recently served as Director of Communications and Campaign Outreach, has helped lawmakers to craft model legislation focused around various issues affecting communities of color and other underrepresented constituencies.

Elizabeth says, “This game-changing news has voters energized--I can feel a progressive victory within our reach--a win for all of us who are tired of backroom deals and "business as usual" politics. For the first time ever, North County could send a progressive Democrat to the Assembly. Think of it!”

Fundraising has ramped up in response to the news, as supporters rally to help California’s OWN Elizabeth Warren be on her way to Sacramento. To contribute, click here.

*Titles for identification purposes only. For more information, contact Sue@LizWarren4CA.com