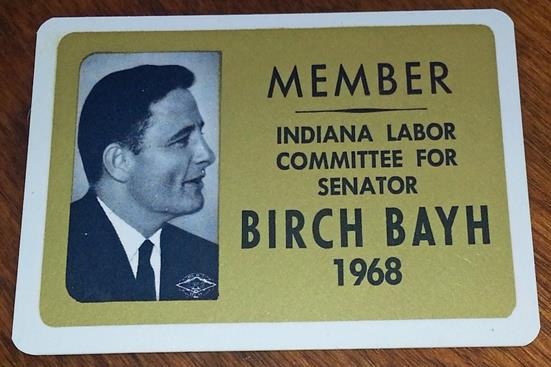 Even as we fight for a living wage (in 2017!) May Day gives me reason to be grateful as I reflect on the struggles of labor unions and the many advances they achieved for working people—the 40 hour workweek, sick pay, overtime, benefits, and more. This card belonged to my maternal grandmother, a lifelong Democrat who supported Indiana Senator Birch Bayh. (His son would go on to become Governor of the state.)

As a very young woman my grandmother worked in a factory. I grew up hearing how after she and my grandfather were married (they were 19 and 21) it took her several years to bear her first healthy child because the hours on her feet and conditions where she worked were so difficult she suffered multiple miscarriages. Thankfully, we have made progress, but there is still much to be done to protect workers’ hard-won protections and address the needs of working people in the new economy. #FightFor15