THE HAND THAT ROCKS THE CRADLE…DESERVES BETTER.

It’s been said that the hand that rocks the cradle rules the world. If that’s true, then it’s high time that hand earned what it’s worth. And if Congress steps up and unflinchingly does the right thing by removing the deadline to ratify the Equal Rights Amendment—they could get it. Everyone remembers ERA as a relic from the 1970s. Women marched in the streets and burned their bras, inspired by Helen Reddy and Aretha Franklin telling them they should “roar” and get some “respect.”

These were the grandmas of the Lilith Fair crowd, and they were epically fierce. As we prepare to pay homage to America’s cradle rockers (of which, full disclosure, I am one) I think it’s only right to point out the gaping contradiction between the outpouring of national adoration we heap on mothers this one day a year—and how America’s laws treat them the other 364 days. 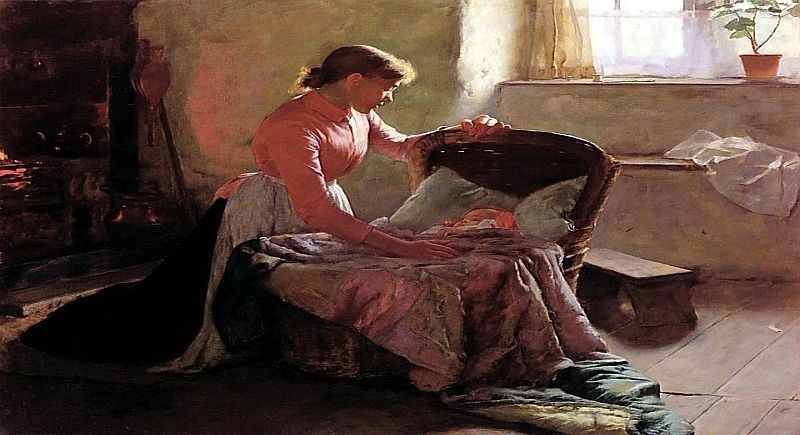 Let’s be clear: I have no personal ax to grind. I have a good life. My husband is a loving, thoughtful, kind and supportive partner who does the dishes more often than I do. (His mother, a working woman herself, raised him that way.) And if I’ve ever been sexually harassed, I was far too busy to take notice.

Yet as I reflect on the current lives of women far less fortunate, as well as my own female ancestors, the stark difference between what they have contributed to the world and how the world has treated them in return seems to be the very definition of injustice. And now, in the 21st Century, institutionalized inequity is so deeply entrenched in the fabric of society as to be considered normal. (The role of religion in perpetuating the myth that the absence of a Y chromosome evinces second class status imposed on womankind by the creator, is another topic for another day.)

America has a separation of church and state, so for now I’m going to focus only on the actions of man as they relate to how men and women are treated under the law and in the workplace. This seems like a no-brainer but I’ll state it just the same: it’s time for Congress to unequivocally endorse treating all of America’s citizens equally—and to put some muscle behind making it a reality.

My maternal grandmother was the child of Polish Catholic immigrants. She’d barely finished 8th grade when the Depression necessitated her formal education come to an end. Despite possessing an impressive intellect she found herself working long hours on her feet in unhealthy factory conditions. She married at 19. Though she and my grandfather had a long and happy marriage, she never did finish school.

When I was beginning to consider journalism as a career she opened an old cedar chest and showed me what can best be described as a treasure trove of unfulfilled promise. Most women of her era kept such chests for linens and goods they’d need when they set up housekeeping with their future husbands. Hers still held some of that, but beneath the carefully hand-embroidered tablecloths, doilies and tea towels lay a cache of published magazine articles she’d written—and sold—in her early 20s. They were mostly reflections on her family experiences.

Eventually her writing career (such as it was) fell prey to more pressing priorities—most notably, motherhood. I often wonder what her life might have been like if she’d had the freedom—both social and economic—to make choices.

The writer Anne Morrow Lindbergh, in Gift from the Sea, acknowledged the disparity of opportunity that existed between the working class and women of privilege, even as she wrote eloquently of the bond of common experience uniting them: the act of mothering.

That women even today are forced to choose between rewarding work and family life, or because they must put food on the table have no choice at all—seems patently unfair. And it’s worse when you consider that on average American women still earn just 78 cents for every dollar men earn for doing the same thing. (The gap widens for women of color, dropping to just 58 cents for our Latina sisters.)1

The fact that Patricia Arquette’s 2015 Oscar-acceptance speech charge (that women should earn a living wage) was headline news, tells us just how little progress we’ve made toward ending the pay gap—and perhaps more importantly, the attitudes that allow it to exist at all.

It’s no surprise that women still outnumber men in service sector jobs and traditionally lower paying “care-giving” professions. And statistically, the number of K-12 public school teachers remains disproportionately female at around 75%, while at the college level (where pay and prestige go hand in hand and are much higher) women are only half as likely to be granted tenure as men (particularly at more prominent institutions). And despite considerable policy advances within higher education, female faculty still earn on average just 81-88 cents on the dollar compared to male faculty.2

Technology is driving a dramatic social evolution, opening doors to new professions and opportunities for many, and creating greater freedom for some workers. Yet the “internal” attitudes that drive decisions in the marketplace still lag woefully behind. We can all remember the “gaffe heard 'round the world” in 2014 when Microsoft CEO Satya Nadella suggested that women earning less than their male counterparts should simply work hard and trust their superiors to apportion their wages accordingly.3 (Translation: Nice girls don’t ask for more money—it’s unseemly.)

Driving much of the conflict, in this reporter’s considered opinion, is a reluctance among some in our culture to let go of romanticized “family values” tropes. (This of course also impacts reproductive freedom, as society lays collective claim to our wombs during gestation yet paradoxically loses interest in what happens to our offspring once they emerge.)

The push to preserve an idealized fiction of the nuclear family as personified by Ozzie and Harriet and Donna Reed (which conveniently fails to note that both Harriet Nelson and Donna Reed were actually working women who only played stay-at-home moms)has resulted in an epic failure to address the realities of a changing world in which families take many forms, and gender roles are blurred, but family needs—economic support for the household and care for our children—remain steadfastly unchanged.

This does a grave disservice to men as well as women. Pundits imply that working women earn less because—for want of a better argument—they lack the “career commitment” of their male peers. Women take maternity leave. They ask for flex time to drive children to dentist appointments or attend to ailing parents. And even with laws mandating gender-neutral family leave (still unpaid in most cases) men are less likely to take the time off for fear of losing their competitive “edge.”

ERA is not about creating a set of special “privileges” for one class of workers. It’s about providing a level playing field so that all workers have equal access to the earnings and benefits that go with doing a particular job, as well as to government-enforced labor protections. These are necessary elements to ensure economic security and quality of life for all working people.

Earning a living wage when you work 40+ hours a week—and having basic benefits and time off—are crucial if men and women—and our children—are to enjoy a healthy balance between work and family life in today’s increasingly demanding world—something other industrialized nations figured out a really long time ago.

America has made some positive strides—but until we have a fully-functional Equal Rights Amendment in force, women will have to make do with a nationwide patchwork of randomly enforced half-measures. And the ongoing state-by-state shopping of anti-worker legislation by groups like ALEC only makes things tougher on working families, regardless of whether those families rely on one income or two, or which one is the primary wage earner.

When women’s wages are depressed it drives men’s wages down too, as the very real threat of being replaced by a lower wage worker looms over every employee’s head come salary negotiation time. (Think of it as domestic outsourcing—or “insourcing” as it’s now coming to be called.)

On a related topic, President Obama is putting a full court press on Congress during his final months in office to approve the Trans-Pacific Partnership—a deal involving increased trade with nations whose workers earn less than 65 cents per hour. This is an issue that should concern us all as it does not bode well for middle class economic recovery or American household stability in this global marketplace. Not long ago, Terry O’Neill, president of NOW, spoke on a national conference call about the disastrous effect TPP would have on women in America, and the world over. 5

American workers will be forced to compete without a safety net if TPP passes, and the U.S. faces the very real risk of being sued if more foreign companies set up shop here and can argue that “expected profits” fell short of their expectations due to costs associated with paying a minimum wage, providing benefits, maintaining safe working conditions, or adhering to environmental safety standards.

Inequality—regardless of its justifications—threatens everyone. Legislation has been introduced to remove the ratification deadline from the Equal Rights Amendment, or ERA, which needs only three (3) more states to ratify to become the law of the land.4

The ERA was drafted by Alice Paul nearly a century ago as a follow-up to the 19th Amendment. In 1972 it passed both houses of Congress but stalled out twice—just three states shy of the 38 needed for ratification before the deadline. Nevada just ratified (in 2017) so we’re down to two. If Congress removes arbitrary deadlines the ERA will at last have a fighting chance.

So in honor of Mother’s Day, and as a worker, a citizen, and a mother, I’m asking members of Congress: consider your own mothers this Mothers Day—and your wives, daughters, sisters, aunts, nieces and friends—along with your constituents: help make America fairer for them and for future generations of women and men. Pledge to give American moms the gift that keeps on giving: a chance at equality once and for all, with a side order of fair pay. It’s long overdue.

This article was published when I was serving as Director of Communications for People Demanding Action, a national social justice nonprofit. - EW